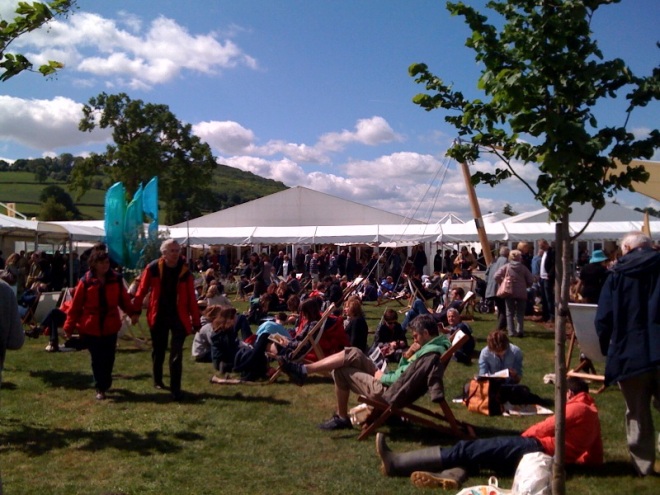 The Hay Festival site is truly wonderful when bathed in sunshine.  After several heavy downpours yesterday the clouds opened this morning and the heavens smiled.  The forecast for the rest of the week is one of steady improvement.  We’ll keep the weather reports posted on this blog  (top right) but fingers are crossed that we will be blessed by sunshine and clemency.

This morning, during the Sky News broadcast of Sunday Live, Christopher Hitchens made what must be quote of the day. It was uttered in response to the assertion made by a member of the audience that the Taliban might have welcolmed the invasion and handed over Bin Laden if they had known a restructure of Afghanistan was on offer.

“The suggestion… has some way to go before it could be considered naiive” opined the great ‘Hitch’.

This had to be one of the most unlikely pairings on offer at Hay this year.  It was  clear from the outset however that Hall was an aficionado of de Botton’s oeuvre and she challenged him on the nature of the philosophy he espouses.  He readily confessed that populist insight and interpretation rather than academic philosophy was the furrow that he chooses to plough, a furrow he followed unswervingly for the next 45 minutes.

There is no doubt that de Botton is a vastly intelligent man who thinks very deeply but he wants us to know that, something he underscored by discussing his intellectual disappointment with Cambridge University.  Apart from a series of scripted questions Hall left the stage to de Botton who treated us to a a stream of self conscious sound bites.  For example he is clearly aware that you catch people’s attention if you mention pornography which he did twice, first in relation to self help books, which are regarded as a lower form, and then to social media which is apparently a bit like pornography  (a similarity which as a blogger and tweeter has so far passed me by).  He told us that his parents were very intelligent people who were psychologically disturbed, happiness is a state which washes over us and  lasts about ten minutes and that he uses Paxman on Newsnight as a way of getting off to sleep.

Alain de Botton is a master at holding the attention of an audience but this session was broad rather than deep, a little like the Chinese banquet with a profusion of dishes that still leaves you at the end, feeling a just a little bit hungry.