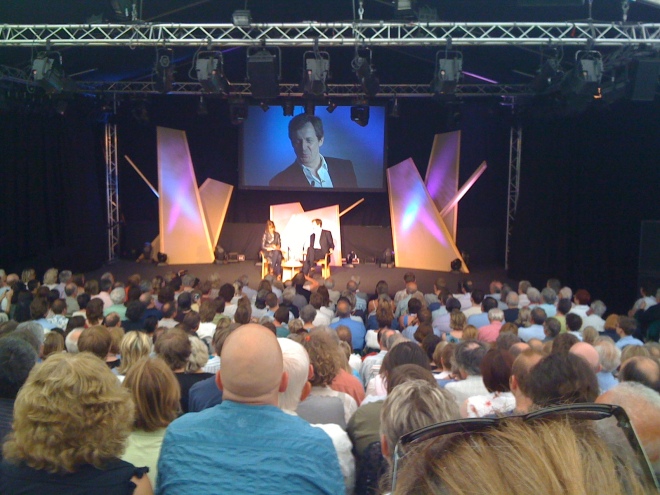 There was palpable tension in the air as the immaculately attired Campbell took the stage on Friday evening.  This is a man who divides a room or in this case a rather large Guardian sponsored tent.  Now that Labour is out of office Campbell is publishing a new set of diaries this time with the good stuff.  The first ‘ Prelude to Power’ starts in May 1994 with the death of John Smith which created the opening for Tony Blair to become Labour leader through to his first victory in May 1997.  The sense of expectation in the audience did not go unrewarded as Campbell provided a frank and direct take on the history of new Labour and his own sometimes flawed contribution

Francine Stock is a sublime interviewer.   She didn’t give any quarter but Campbell parried the incisive questions with the skill that might be expected of one of the great communicators of the age.    One of the most intimate revelations was over his response to the victory of 1997  “‘It was anti-climactic and Tony felt the same.  Everyone was going wild at Festival Hall and both of us just wanted to go home…”I didn’t feel part of the celebrations at all.”  Revealing that for Campbell it is the journey rather than the destination that carries the greatest weight and interest.

Stock also probed him on his mental state during and after that journey.  He didn’t sugar coat his response alluding to both psychiatric help and the mental illness he has experienced and in this openness he does much to take away the stigma.  Campbell is proud of the achievements of the Blair years  “the three founding goals of the Labour party were minimum wage, devolution & abstinence, after eighty years of Labour we delivered on two of these”.

The historian John Julius Norwich took us on a whistle-stop tour through many of the world’s great cities and it was a charming and informative romp.   From early settlements likes Samarkand which grew up on the great human river that was the Silk Road to the birth of the great cities of Europe.   We were told of the detailed planning that went into the creation of the city of Washington DC to be something unique and different from the capitals of Europe – President George Washington’s regarded London and Paris as breeding grounds of vice and corruption.

Architecture featured heavily.  Barcelona a truly great European city is marred in Norwich’s opinion by the cathedral of the Sagrada Familia “the most creative example ever of egregious bad taste”.  Singapore is Disneyland with the death penalty.  Norwich told us of his love an admiration for the modern gleaming spires of Chicago but the ‘most’ modern city on the planet is Shanghai.  “The modern architecture of Shanghai makes Chicago look like Bath”.

Allegra Huston or ‘Legs’ as her sister Anjelica calls her was at Hay to discuss her autobiographical memoir ‘Love Child’ published last year.  Huston was born in London and her mother the American ballerina Enrica Soma was married to John Huston who she Allegra believed to be her father.  In fact her biological father was the aristocratic historian John Julius Norwich.  What made this session all the more extraordinary was the fact that Norwich was in the audience.

Allegra’s mother died when she was four and her childhood was one lived out of a suitcase.  There was the time spent with ‘Dad’ in the “Little House” on the Huston estate in Ireland, and stays with family in Long Island and Mexico.

There were tales of the time spent living with Ryan O’Neal’s, her sister’s boyfriend, and his family.  He is the only character in this story for whom Allegra has complete contempt “Ryan O’Neal is frankly an asshole”.  Eventually at the age of twelve, she was told of, and introduced to her real father.  “I was very lucky in my two fathers …open-hearted generous spirited men” Allegra told the audience at Hay.

Although to her it is not a story about the Hollywood A-list, it is an insight into that world and its insecurities.  Perhaps the most poignant moment of all was when Allegra told us that the monogrammed suitcase out of which she lived her young life was also not entirely hers, the A.H. had been put there for her older sister ‘Anjel’. 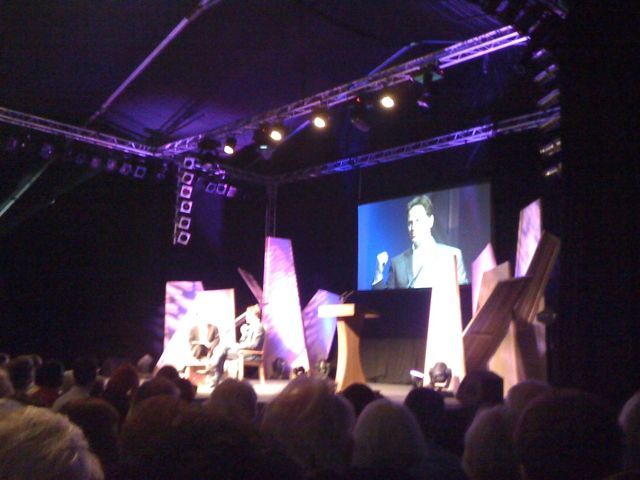 I’ve popped over to the Globe in Hay, a grey stone edifice surrounded this week by tents and flags for the HowTheLightGetsIn festival. In it’s second year, it is essentially a fringe festival of philosophy and music. It’s on a modest scale but there is a cool vibe, a bit like a posh Glastonbury Green Fields with a Taittinger and Pimms bar.

It’s attracting some big names on and off stage, for stage read yurt by the way. Ruby Wax was walking past as I walked in. It’s a lovely addition to Hay and the Pimms is a bit cheaper. 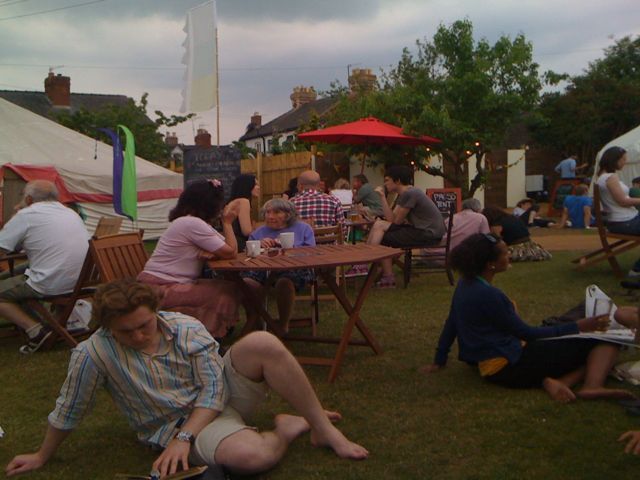 The former metropolitan police commissioner Ian Blair has oft been described as an arch politician, if this session was anything to go by that’s not too wide of the mark.

Given that the shooting of Jean Charles de Menezes by armed police occurred on Blair’s watch it was a racing certainty that the liberal Hay audience would want to the subject probed, which Nik Gowling did with unfailing determination. You could see the palpable frustration on the face on the interviewer as Blair gave open answers to his questions that added little to what we know and seemed at times rehearsed.  At one point Blair even reprised the argument he used so much at the time “what is he had been a bomber?”.  This logical impossibility suggests that there is still some level of denial in Blair’s psyche as to the sheer scale of the  error.

On other matters Blair was highly persuasive.  He argued convincing that he had brought deep and wide ranging reform to the police “abolishing Special Branch created an enormous amount of hostility from within the force”.  His opposition to elected directly elected police commissioners was well argued siting serious failings in the US; one elected sheriff justified the use of 68 bullets in shooting a man suspected of shooting a US police officer by saying “that was all the bullets my officers had.”

One other matter that has surfaced in several sessions but hasn’t been investigated in any depth during the festival is the impact of social media on communications.  Open communications platforms might have changed the way the de Menezes case was reported and as Nik Gowling asserted “there may be people tweeting in the audience right now”.  He was right. 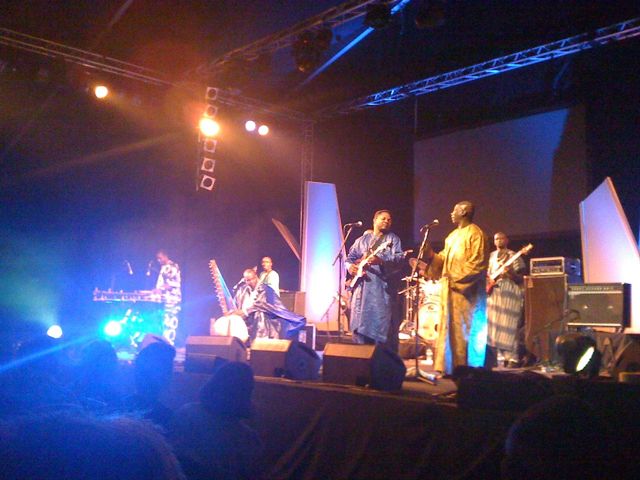