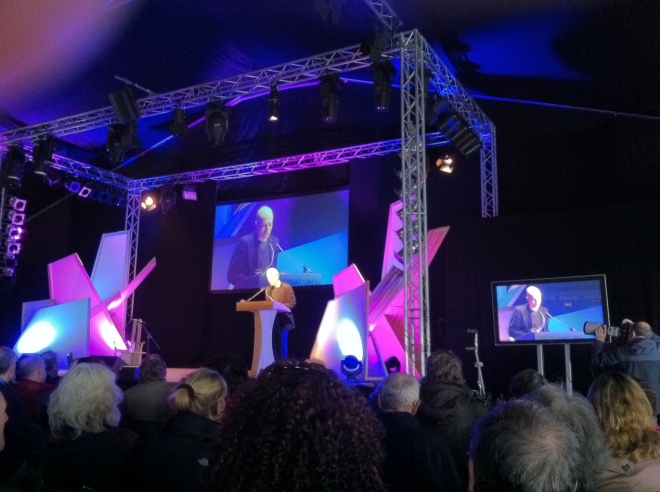 Alain de Botton begins by saying that he does not believe that God exists, but moves swiftly on.

He talks about religions as dishes at a buffet or cafeteria where we can select what we like from each. He makes cultural reference to literature and music stating that we wouldn’t listen to a single musician or composer or read a single author. Comparing Catholicism to The Beatles would seem to be something of a stretch.

The essayist and philosopher turns to religion and education. He suggests that the secular approach to education is mechanistic whilst religious education plays to the fragile reality of human existence. He talks about ritual in religion that harnesses the community to deliver truths to the inner self.

Oratory in the Pentecostal church creates a far greater response and involvement than the average university lecture.

Another station at de Botton’s imagined buffet is the one where we consume art. He argues that art does not realise
its potential to move us. When art is combined with religion the messages are simplified and more effective. Alain de Botton was confused by Rothko when he first saw his work at The Tate and believes that his messages have been obscured by an ideology of coolness.

He comes closest to describing religion when he talks about them as institutions and organisation and when he references religious community.

His arguments were carefully constructed but ultimately very narrow. He focuses on the structures and cultural outputs of religion but avoids entirely both the intentions and purposes of religion.