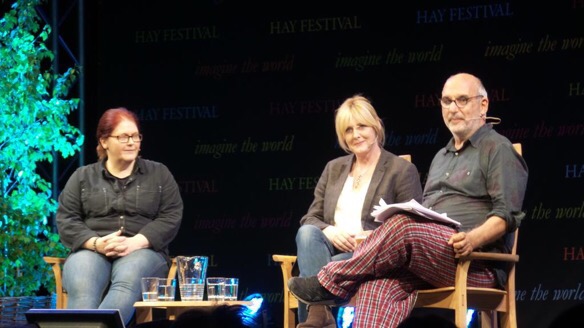 The Hay Festival assembled the writing and acting talent behind two of the top TV dramas of recent years; ‘Happy Valley’ and ‘Last Tango in Halifax’.

Sally Wainwright reveals that ‘Last Tango in Halifax’ was actually her mother’s story. In Oxford, rather than the Yorkshire town where the series was set, she met and fell in love with a boy from school. The working title was ‘Anthony and Cleopatra’ but with Derek Jacobi on board there was concern that the audience would think it was Shakespeare.

After the run throughs for the show, before filming, Sarah Lancashire got a call from her Director to tell her that Caroline, the character she was playing was gay. It seemed appropriate, on the day that Ireland has voted for gay marriage, to be discussing one of the most rounded gay central characters that has appeared on a prime time UK TV series.

Wainwright gives some insight into the challenges of writing for TV. Writing characters and even dialogue can be easy, plots are where the real challenge lies.

Tributes were paid by the whole ‘stage party’ to soaps and Coronation Street in particular, where both Sarah and Sally honed their talents.

Sally revealed that she wrote ‘Happy Valley’ when she was given the green light to write whatever she wanted after the success of ‘Last Tango’. It was a kind of ‘Juliet Bravo’ for the 21st century. The lead role was witten for Sarah Lancashire, something that the actress said she found “very scary”. The insight for the role came from ‘Lisa’ a Greater Manchester Policewoman who happened to be an old school friend of Sally Wainwright, who this time directed, as well as wrote, the powerful psychological crime drama.

Tipping the family members out of their beds in order to attend Helen Lederer’s early session, was worth every grumble when she rewarded us with an entertaining hour of comic indulgence. The miseries hanging over from the late night before disappeared as this talented performer took to the stage, treating the audience to a ten minute display of her stand-up comic talent. By the end of her introduction, she had won the hearts of most of the audience.

Helen is at Hay to promote her first novel ‘Losing It’, a tale of a middle-aged woman’s participation in a paid trial to lose weight. As she loses weight, she hopes to save her house. The heroine has tried all kinds of faddy approaches to her weight-loss, some based on real-life experiences and Helen made us giggle as she read a passage about the All White Clinic for colonic irrigation. Helen states that she writes in a new genre of ‘mid-lit’. Her type of comedy is about recognition & making it feel as though she & her audience are ‘as one’.

The serious dilemma of working as a woman in comedy (a male dominated industry) has encouraged her to promote the new ‘Comedy Women in Print’ award (CWIP). Behind the funny exterior, lurks a clever, observant mind.

Intelligent comedy reading for the middle aged – I look forward to reading her novel.

A journey from the depths of deepest, darkest Kent necessitated being hoofed out of bed at an unholy hour by She Who Must be Obeyed. Much unimpressed as I was, I dutifully complied with her ministrations. The fickle motorway gods were, for a change, beneficent. Thus we arrived in these parts at high noon. Having been buffeted by the slings and arrows of outrageous isobars last year, it was a pleasant suprise to be greeted by the sun.

Sadly neglectful of my literary duties I regret to advise that my first port of call was one of the purveyors of beer, wine, pizza and other assorted delights. As Brendan Behan was a drinker with a writing problem, so am I a reader. After a stern talking to, normal literary service will be resumed in due course.

The genesis of this book was the 2008 Cheltenham Literary Festival and a battle with Mary Beard over the relative merits of the Greeks and Romans. Edith won the debate and resolved to take a break from academic books and write something for a wider audience, a book that might help pay her children’s university tuition fees.

Her enthusiasm for the subject started early. Most eight year olds were reading the Beano when Edith first became interested in the ancient Greeks.

The Greeks were seagoing. The Ancient Greek words for ship and mind were almost identical and they anthropomorphised their vessels. To understand the Greeks you have to appreciate how important the water is to Greek civilisation. In Greek mythology many of the heroes are sea captains and great swimmers.  The Odyssey is a prime example. Greek myths are also unlike any others with their stories about the raw pursuit of power and influence.

Edith claimed to be nervous but a more animated, enthused and confident classicist would be hard to imagine.

I must admit that apart from picking up an Evening Standard on the way out of London every now and again, I rely on TV and the Internet for my news fix. Twitter alerts me to breaking news quicker than any other medium, and if I’m out of wifi reach the car radio fills a gap.

Up until today, I’d not realised just how out of date by comparison today’s newspapers are. We left the Hay festival site tonight just after 7, at the same time as tomorrow’s Telegraph were being delivered.
I’m sure that other papers have to meet similar deadlines.